Before Lin-Manuel Miranda shot to fame in the mid-2010s with Hamilton, he had already enjoyed success with his 2005 musical, In the Heights, with a book by Quiara Alegría Hudes, winning four Tonys for its Broadway production in 2008. Set in Washington Heights, a largely Dominican neighbourhood in Upper Manhattan, it now comes to cinemas, following the lives, struggles and dreams of its inhabitants, who simply cannot stop singing.

Well, singing and rapping – and it’s the rapping that shines, Miranda’s lyrics as witty and intricate as those in Hamilton, while the singing is less impressive, and the domain of the film’s women, who Mike wishes had been given the opportunity to rap. We discuss our disappointment in the direction – the film is full of visual ideas that aren’t executed to their fullest potential – and its relationship to the cultures and peoples it portrays.

In the Heights has its flaws, but despite them, it’s an immensely likeable portrait of life in its locale, José in particular, an immigrant to North America himself, recognising a lot of what it depicts and loving the way it shows off the cultures around which it’s based. We pick fault with it, because that’s what we do, but don’t let that stop you from seeing and enjoying it.

Listen on the players above, on Apple Podcasts, or on Spotify.

A classic of Hollywood crime, The French Connection paints a bleak picture of life and justice in America, as Gene Hackman’s Popeye Doyle demonstrates that no matter how low the drug dealers he pursues, he can sink lower. We ask what its depiction of New York’s underbelly and the accuracy of Doyle’s hunches despite his revolting behaviour says about the filmmakers, and consider Pauline Kael’s assertion that the film is “what we once feared mass entertainment might become”. Underneath the iconic style and unforgettable chase, is there anything meaningful to The French Connection?

(You can see Mike’s film, which for some reason he doesn’t mind comparing to The French Connection, below.)

Listen on the players above, on Apple Podcasts, or on Spotify.

Independent filmmakers Josh and Benny Safdie team up with Adam Sandler for Uncut Gems, an energetic, evolving crime thriller set in Manhattan’s Diamond District. By the time we meet Sandler’s Jewish jeweller, Howard, he’s already embedded within a web of competing interests, desires and debts, as well as a gambling addiction – and the tension only mounts as problems grow worse.

The Safdie brothers and Sandler are all Jewish New York natives, the writer-directors in particular growing up, in part, around the Diamond District, where their father worked. There’s a specificity to the location and culture that the film captures beautifully, a richness to Howard’s characterisation, and the world he inhabits, that feels authentically observed. Howard’s need to take risks never allows the tension to settle – he can’t help but invite further trouble upon himself, so neither does the film let us calm down for a second.

Uncut Gems is a complex, character-oriented, engrossing work of edge-of-your-seat genre entertainment, and a terrific follow-up to the Safdies’ 2017 thriller Good Time, which we discuss a little bit (but not too much because José hasn’t finished it yet). Both Good Time and Uncut Gems are available on Netflix, and well worth your time. The Safdie brothers might not just be good – they might be greats.

First of all, huge thanks to the Electric Cinema in Birmingham for not only screening a preview of irresistible hangout flick Skate Kitchen, but for hosting a Q&A with director Crystal Moselle and some of the cast – not professional actors, but girls who genuinely hang out and skate in New York City under the name “Skate Kitchen”, and whose daily lives form the basis of the film. A chance meeting on a train led to Moselle shooting a short film with them and ultimately this feature. Moselle has been here before: her debut, The Wolfpack, also came about due to her curiosity about a group of people she came across in New York, but that was a documentary, and Skate Kitchen is narrative fiction.

Indeed, the narrative works to bring out the best of the setting and people, structuring the documentary aspects to avoid losing much focus while bringing out observations of these girls’ lives that feel deeply authentic, pointed, and original. It follows a teenage skater with a rebellious streak becoming part of the Skate Kitchen collective, the changes to her life as she grows up away from home, and the inevitable conflicts between the girls and the boys who dominate the skate culture they want a part of.

We discuss the nuances in the film’s construction of a divorced family in which both parents are nonetheless present, and in which the child is given agency over her relationships with them; the wholesomeness of the girls’ interactions, particularly with one of their dads; the dimensionality of the boys, particularly in terms of sexual desire and their interactions with girls – and the way the girls’ bodies are displayed not as passive, simply intended to look sexy, but as active and really, really fucking talented. Watching them skate is, just like watching the horse breaking in The Rider – also played by non-professional actors using their real-life skills – a pleasure in which the film allows us to indulge deeply.

Finally, Mike wants to apologise for the sound quality in this episode. He forgot to plug the mic in. 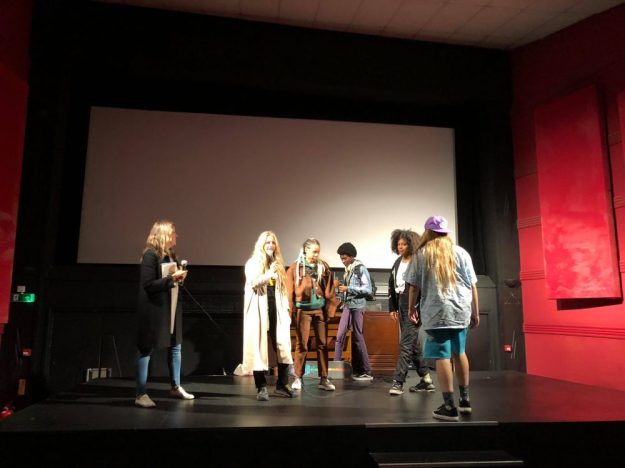 The podcast can be listened to in the players above or on iTunes.